There are two kinds of variable: System and User variables

It’s a set of predefined variable representing the proprieties of the mobile-phone where the application is running on, for instance, System screen size or Language, etc.You can see the liste of the system varibales on the variable dialog (Ctrl + Alt + v) 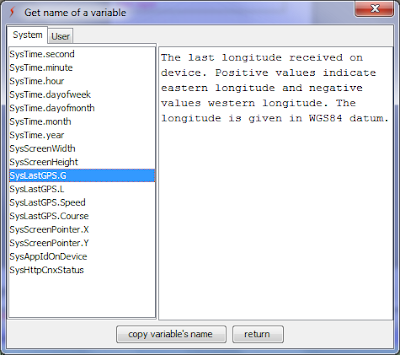 It’s a way to define, to keep and to modify the states of user's interactions. By now JM-Mobile provides two primitives variable types: STRING and INTEGER.

Using of variable make the presentation of application more dynamical. In general, to use a variable we put a $ at the beginning of the variable’s name (e.g. $myScore) and put it inside a pair of {}, e.g., {$myScore}

By example:
We have a variable called myScore that keeps a score of user. In the end of application we want to show this score, we can create a Text object and edit its text content as following:
“My score {$myScore}”

Using variable in the FileName attribute of an image object

This application of variable allows changing to corresponding image content with the situation of the user’s interaction.

By example:
We have a string variable called stateOfMind that can take a “happy”, “sad”, “lovesick”, etc. then we want to show an image corresponding with a state of user in the application, we can create an image object with its FileName attribute specified as following: